Philadelphia Is the City of the Year

THE EDITORS OF GQ

Suddenly, Philadelphia has become a model city, with a Super Bowl-winning (and Trump-defying) NFL team and a new radical political class. Oh, and Meek Mill is finally free. We asked some of our favorite locals why they’re celebrating 2018.

To be from Philadelphia is to be accustomed to losing. We have a history of losing. You learn about it in school. Every year we’d make the trek out to Valley Forge, 24 miles northwest of the city, where George Washington’s army sheltered in place after losing first downtown and then the neighborhood I grew up in, Germantown, in a series of terrible defeats. Winter hit in Valley Forge, and Washington lost thousands more men. We’d go into their freezing huts, which still stand, and imagine loss.

Later we were the nation’s capital, until we weren’t. Our baseball team, the Phillies, has the distinction of having lost more games than any other professional sports franchise in the country. This magazine called us the “meanest fans in America.” One of our stadiums had jails and judges in it. Until recently, our one victorious athlete was Rocky Balboa, who is a fictional character. But then a weird thing happened: We started winning. I don’t just mean the Super Bowl, which, you may recall, the Eagles won on February 4, 2018, in a thrilling 41–33 victory over the New England Patriots, who came out onto the field to the song “Crazy Train” for some reason. We came out to Meek Mill’s “Dreams and Nightmares.” Even my parents were saying: “Free Meek Mill.” Then, in April, Meek Mill was freed. The first thing he did was take a helicopter to a Philadelphia 76ers game to see Ben Simmons and Joel Embiid play, because Simmons and Embiid are fucking amazing.

Eagles players became activists, speaking out about the flawed criminal-justice system. Donald Trump disinvited the team from visiting the White House out of spite; our mayor, Jim Kenney, then called our president “a fragile egomaniac obsessed with crowd size.” Our recently elected district attorney, Larry Krasner, is the most progressive D.A. in the entire country. Our restaurants now regularly grace *Bon Appétit’*s Best New Restaurants list. Will Smith joined Instagram and immediately became incredible at it. You don’t have to sell your plasma or your soul to afford an apartment in the city. It just feels…different in Philadelphia these days. Downright victorious, even.

Michael R. Bloomberg, the billionaire businessman and former mayor of New York City, is donating $1.8 billion to his alma mater, Johns Hopkins University, to create a fund that would help low-income and moderate-income students attend without having to worry about the cost, his charitable organization, Bloomberg Philanthropies, announced on Sunday.

The money would expand the university’s endowment by more than 40 percent, to about $6.1 billion. The fund would be dedicated to undergraduate financial aid and recruitment, and would be enough, a university official said, to cover the full difference between the cost of attending Johns Hopkins and the amount that students and their families can afford to pay.

“America is at its best when we reward people based on the quality of their work, not the size of their pocketbook,” Mr. Bloomberg wrote in an opinion essay published online in The New York Times on Sunday. “Denying students entry to a college based on their ability to pay undermines equal opportunity. It perpetuates intergenerational poverty. And it strikes at the heart of the American dream: the idea that every person, from every community, has the chance to rise based on merit.”

The rising cost of higher education and the heavy debt loads that many students shoulder have become significant political issues in recent years. Liberal politicians like Senator Bernie Sanders of Vermont have proposed free public college tuition for all students, and states like Tennessee and New York have set up programs to significantly widen access to their state college systems for low-income students.

Mr. Bloomberg’s gift comes at a time when he is considering running for president in 2020. It may help to improve his standing with lower-income families, particularly those who are black or Hispanic.

But Kevin Sheekey, a top adviser to Mr. Bloomberg, said on Sunday that the gift was not made with the election in mind.

“There is absolutely no connection at all,” Mr. Sheekey said. “It’s a natural extension of work that he’s done most of his adult life.”

Mr. Bloomberg has already given more than $1.5 billion to Johns Hopkins for various purposes, including scholarships, but scientific research and endowed professorships have dominated his giving in the past; the new gift, aimed solely at student aid, represents a shift in focus.

Richard Kahlenberg, a senior fellow at the Century Foundation and an advocate of social and economic diversity in college admissions, said that while stronger financial aid was one way to boost the admission of lower-income students, universities also had to make other allowances for them.

“These students are out there, and generous financial aid programs could help more of them be aware of the opportunities that exist for them,” Mr. Kahlenberg said. “But unless Hopkins is also willing to provide a preference in admissions to disadvantaged students, it’s unlikely that they’ll be admitted in large numbers.”

He noted that students from affluent backgrounds enjoy a great many advantages besides their family’s financial means. “The admissions process has just gotten so competitive that even high-achieving low-income students won’t necessarily be admitted,” he said. “You need to provide consideration of the obstacles that they’ve had to overcome, along with generous financial aid.” 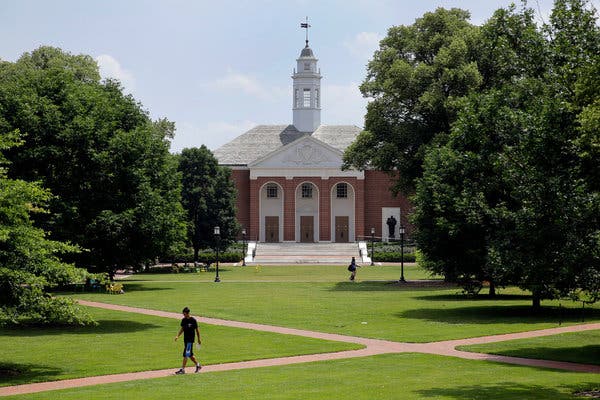 The announcement of Mr. Bloomberg’s gift came with a sentimental backdrop. He recalled in his essay that he was able to afford to attend Johns Hopkins only with a National Defense student loan and a job on campus. His father, a bookkeeper, never made more than $6,000 a year, he wrote.

The education he received changed his life, he said, and he was so grateful that he began donating money to the university in 1965, the year after he graduated. His first donation was $5.

He called on others to do what he had done — giving money to their colleges and universities — and on the government to do more.

“Together, the federal and state governments should make a new commitment to improving access to college and reducing the often prohibitive burdens it places on so many students and families,” Mr. Bloomberg wrote

Mr. Bloomberg is not asking that his name be attached to scholarships, his aides said. The former mayor is turning over the money as one lump sum, rather than in annual installments, the aides said.

In an email to Johns Hopkins students, faculty and staff, Ronald J. Daniels, the president of the university, called the gift “staggering in its vision and breathtaking in its impact.”

Mr. Daniels said that the gift brought Mr. Bloomberg’s combined donations to Johns Hopkins to more than $3.35 billion. “This constitutes the largest philanthropic investment ever made to any institution of higher education in the United States,” he said.

Many elite colleges are now “need-blind” in their admissions, ignoring ability to pay when selecting students and promising that those it accepts will be offered sufficient financial aid to attend. Johns Hopkins has been effectively need-blind for the past seven years, but had not been able to make the policy permanent, officials said. The announcement from Bloomberg Philanthropies said that until now, the university had one of the smallest endowment funds available for financial aid among its closest academic peers.

The cost of attending Johns Hopkins for the current academic year, including tuition, room and board and books, is $72,566, according to the university. The average grant to students needing financial aid is about $41,000; that is expected to increase significantly, university officials said. The average family contribution is about $23,000 a year, and that figure would be expected to fall, but university officials said they could not yet estimate how much. Loans, work-study jobs and outside grants are currently used to cover the remaining costs for students.

Going forward, students who qualify for need-based aid will no longer have to take on loans as part of their financial packages, though work-study will remain a component.

Nearly half of Johns Hopkins undergraduates now receive financial aid, and the proportion is expected to grow with the Bloomberg gift. The percentage of students eligible for federal Pell grants, a measure of poverty, is expected to rise to 20 percent in 2023 from 15 percent now, because more students from poor families would be able to attend, officials said.

Unlike some “need-blind” schools, Johns Hopkins said it would not set a specific income threshold for determining whether students are eligible for financial aid. Instead, officials said that eligibility would depend on an analysis of the family’s full financial circumstances, including income, assets, the number of other children in college and the like.

An earlier version of this article erroneously described how Michael R. Bloomberg’s donation would expand the university’s endowment. It would increase by more than 40 percent, not almost 30 percent.